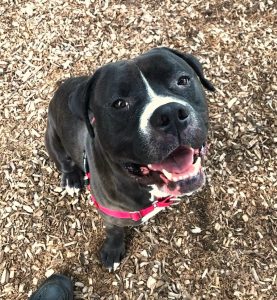 Did you know, on the dark night of May 21st of this year, Animal Control received a call for a stray dog wandering around Liberty Corners Road who was very fortunately restrained by the Animal Control Officer of Vernon, New Jersey who found him at 8pm alone and dodging cars.  The Vernon ACO had a carload of guests and couldn’t offer the dog a ride to the Warwick shelter, so our ACO responded from 20 miles away since that is the distance between Greenwood Lake and Pine Island!  The large, black dog with an obvious skin infection around his eyes and body was super friendly and very happy for the lift to the shelter.  However, not knowing if his skin condition was contagious, caution was exercised to avoid contact without gloves.  Upon intake, he was checked for a microchip which was negative, and he was not wearing any form of identification so there was no way to find his family, a family who never reported him missing or bothered to look for him.  Weighing in at 69lbs. his new name became Tonka and believe him to be only 2 years old.  He presented with ear infections requiring twice daily drops for two weeks and two skin medications for 21 days each.  Tonka was very cooperative in taking his pills and having his ears treated and quickly became a staff favorite.

He is an American Staffordshire Terrier mix based on his big head and he has white markings on his brindle-colored fur which has completely healed.  His short haired coat is now shiny and soft.  He has the typical clown like goofy and exuberant personality.    Although his former family had him neutered, they didn’t provide him with any leash training or manners.  He has had to learn them with the staff.  He loves going for long walks and tries not to pull too much and he thoroughly enjoys playing with his toys.  He quickly learned to play fetch but only with his favorite ball which will definitely go home with him when he is adopted.  Tonka is food and treat motivated so teaching him can be a breeze. He is quite athletic and will leap over objects just for fun.    For four long months, he has had to live in concrete kennel which has not yet dampened his spirits or his zest for life.   He displays his affection with sloppy kisses and rubs his wiggly butt against his chosen human.

It’s past time for Tonka to go home as an only pet to an attentive family with older children able to handle his size and silliness. Tonka is a stable, good dog who will add a lot of fun and love to a responsible home who deserves him.